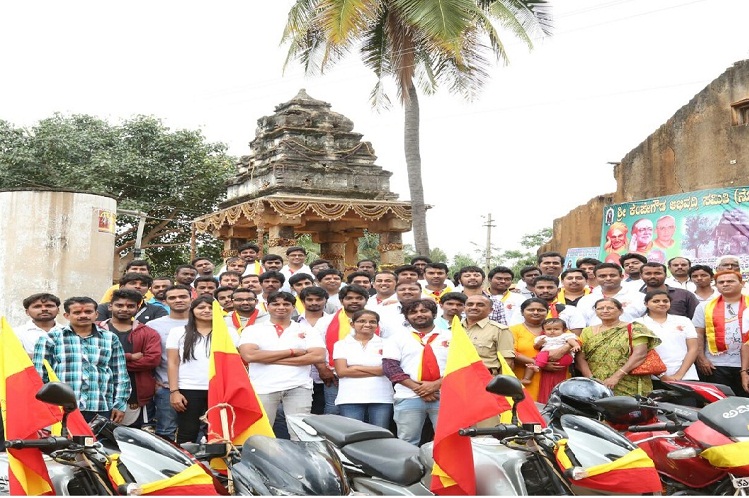 Founded in 2012, the group has an eight-member core team

A group of activists from Bengaluru-based Samanya Kannadiga, replaced the Hindi lettering of a milestone on the Bengaluru-Mysuru National Highway with Kannada. That road was a state highway until May 2014 and the letters were in Hindi until now.

Meet the activists of Samanya Kannadiga, an organization, which is a bengaluru based civil society group. What sets the group apart from language groups such as the Karnataka Rakshana Vedike is that Samanya Kannadiga wanted to bring about a human connect; linguistic connect is just one of their goals.

Founded in 2012, the group has an eight-member core team, which heads a 10,000-strong membership across the state.

President of the group, 31-year-old Sandeep Parswanath says that they have been deeply disturbed by the “drastic decline in the number of people speaking the 2,500- year-old language”.

“If this goes on, a linguistic crisis is soon to be a reality in Karnataka because of obvious reasons – the large scale economic migration in the last decade,” he says.

However, according to the 2011 Census, speakers of Kannada have actually been rising for the last three decades, the highest being in 2001.

The group however maintains that it is not against the cosmopolitan nature of the city, which has a large number of native speakers of Tamil, Telugu and Urdu, and smaller numbers of other language groups such as Marathi.

General secretary of the group, Vivek V says that migrants to the city are ignorant and insensitive to the locals in the state. “They rant about the city’s civic issues every now and then, but they don’t bother putting in the effort to learn the necessary words of the local language,” he says.

“We don’t expect people to write Kannada literature within a year. Our goal is to get people to respect local sentiments and assimilate themselves to the city they have come to live in. Anyone who knows how to speak Kannada or at least makes an effort to learn the language is a ‘Samanya Kannadiga’,” he said.

To this effect, the group is planning to start Kannada classes at their centre in the Basavanagudi area of the city soon. “The fee would be a nominal amount of Rs 50 per month. They would be taught basic words that one would need for basic communication,” he said.

While he prefers English as a language that could connect speakers of regional languages.

“When you go to a French restaurant, the menu is in French. In fact you are also forced to learn French before you enter the country. Then why should it be different here? In fact, we are not inventing our demands. Even after BBMP had made it mandatory for restaurants to have a menu in Kannada, they still don’t follow the rule,” he said.

The group also says that what sets it apart from other organizations is that it is tech-savvy. They say one of their achievements is emailing banks and getting them to include Kannada in ATMs.

One of the reasons they replaced the Hindi lettering of the highway milestone is that they believe that Hindi is not the national language of the country and therefore, it cannot be imposed as a common language.

“Many people still think Hindi is the national language and expect the rest of the country to speak it, which is not right. We tirelessly tell them every time that they are wrong. We also don’t tolerate anyone who abuses Kannada and the culture of the state,” he said.

Earlier this month, the group had filed a complaint with the Bengaluru police against a techie for using abusive words against ‘Kannada and Karnataka’. 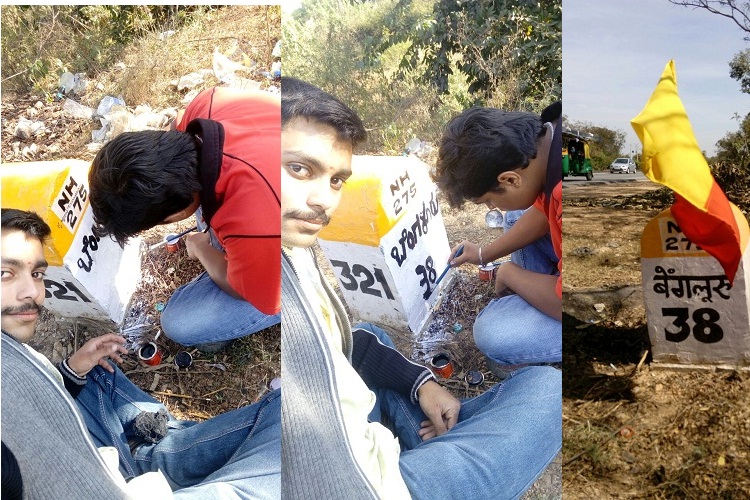 The group claims that it conducted a survey in the city, and found that it was necessary to know languages other than Kannada when they have to get any kind of service.

“Almost all the people residing in Bengaluru would deny that they can’t survive in the city with knowledge of just Kannada, and that is a bigger threat for the rich culture and Kannada heritage that Karnataka is known for. We are creating an an environment in which a Kannadiga feel proud in just knowing Kannada” Vivek says.

However, the group is against any perceived threat to the ‘unity’ of the state. Asked about demands for a separate state for Tulu speakers in coastal Karnataka, which would be called Tulunadu, Vivek said that Tulu should be recognised as one of the state languages.

“But I don’t support a separate state. I have the same views about Kodavas too. We are not going to achieve anything by dividing the state, it will only make Karnataka weaker compared to other states, just like what has happened to Andhra Pradesh,” Vivek said.