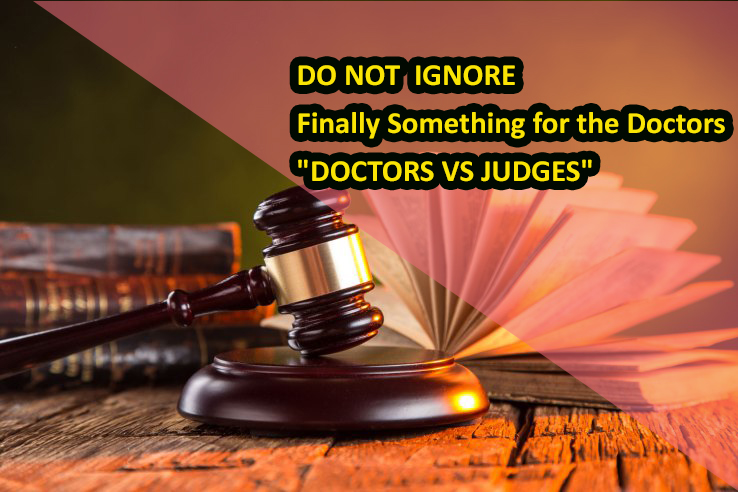 In the Salman Khan hit and run case the LOWER court judge and the HIGH court judge had the SAME pieces of EVIDENCE to deal with.

They also had the SAME Indian LAW to abide by and most probably they had similar education qualifications too.

Yet they INTERPRETED the situation in absolutely CONTRASTING manner and gave verdicts which are poles apart.

Just imagine what would have happened if a YOUNG doctor sitting in a GOVERNMENT hospital doctor catering to hundreds of patients in a day had diagnosed a celebrity patient presenting with gastric discomfort as GASTRITIS and another hospital had LATER on diagnosed that patient to be having a MYOCARDIAL INFARCTION. I am sure that doctor would have been screwed and jailed.

A JUDGE gets YEARS to decide on a case unlike a DOCTOR who is expected to diagnose and treat everything in the BLINK of an eye.

If a doctor making a wrong diagnosis can be prosecuted shouldn’t a judge giving wrong verdicts meet the same fate?

If hospitals can be sued for not admitting poor patients shouldn’t the courts be prosecuted for having lacs of impending cases?

Is it not appalling that a judge taking 12 years to give a wrong verdict gets away unhurt and a doctor making one mistake is screwed by our legal system?

Doctors practice medicine which is more of an art than an exact science whereas law is absolutely 100% manmade, yet doctors are expected to be right on all occasions.

If there is so much of hue and cry in media about doctors and hospitals charging huge sums from patients then why do we not ever hear a word on the fee that lawyers like Manu Singhvi and Jethmalani charge for their court appearances.

If health is a citizen’s right then so is justice. Shall we take our minds off worshipping false heroes & think?