Pro Kannada activits had called for bandh on September 9th which was well recieved by kannada people. People from all walks of life supported this , while Biocon chief kiran mazumdar shaw make a joke on bandh in a very light tone.

Tweeting about the issue kiran had said , “Bengaluru must be renamed as bandhaluru”. This was not taken lightly by Samanya Kannadiga , a kannada based civil socity group and pasted the same on its facebook page. The post went viral and Kiran stament was retweeted by kanndigas. 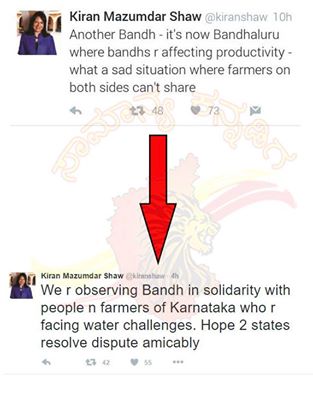 By the time kiran realised her mistake , it was too late . She had to face fury of kannadigas . She later tweeted that she supported the bandh