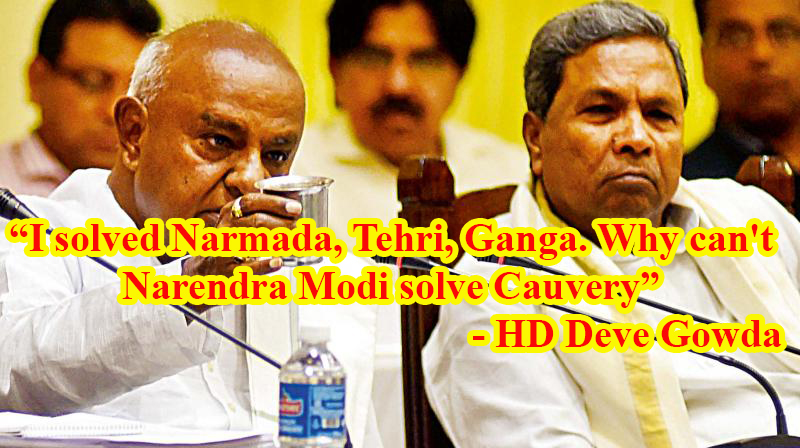 H D Deve Gowda, the only Karnataka chief minister to have managed to resolve a Cauvery crisis through talks overseen by then Prime Minister P V Narasimha Rao, says it is not the Supreme Court or the Cauvery supervisory committee but the union government which has to sort the current interstate problem between Karnataka and Tamil Nadu.

In an interview , ahead of the supervisory committee meet on Monday and an apex court hearing on Tuesday, he said: “Tamil Nadu has  always won its case because of its ability to apply political pressure. Only the union government can ensure there is no further injustice to Karnataka. This state is the only one in the South which elected a BJP government, shouldn’t they do something to help it?”

What is the way forward on the Cauvery imbroglio?
Deve Gowda: We have no water in the state, the storage in our Cauvery basin reservoirs (less than 29 TMCFT on Saturday) is inadequate to meet  the drinking water needs of Bengaluru, Mysuru, Mandya till June (requirement 30 TMCFT). The Supreme Court ordered us to release whatever we have left to save the samba, which is the third crop in a year raised by Tamil Nadu farmers. This is being done. How is this justice? The court and the supervisory committee will only follow the language of the Cauvery Water Disputes Tribunal award, which we have contested. In this situation, only the union government can ensure there is no further injustice to Karnataka.

Karnataka’s BJP leaders insist that the Prime Minister has no role to play as the dispute is before the Supreme Court.
Deve Gowda: The union government has got notices to respond to the special leave petition that Karnataka has filed against the tribunal award in the Supreme Court. Of course, they have a role. As PM in 1996, I called the chief ministers of Rajasthan, Gujarat, Madhya Pradesh and Maharashtra at the height of Medha Patkar’s agitation against river Narmada dams. We discussed and sorted out the issue of what the dams height should be and the project went forward. I personally met environmentalist Sundarlal Bahuguna, went to villages around the Tehri dam in Uttarakhand, ensured landslide-resistant technology so that the dam could come up. Why can’t the union government do something about Cauvery in the same spirit?

Deve Gowda: She may not agree. It is her nature. What I want is for the union government to make its stand clear on the matter. Right from the British period, Tamil Nadu has had more political clout and their ability to apply political pressure has ensured they always win their case. Karnataka is the only state in the South which elected a BJP government. (Union minister) Ananthkumar is a six-term MP from from Bengaluru. They have 288 MPs in Lok Sabha. Shouldn’t they do something to help Karnataka?

In 1995, another distress year, how did you as the Karnataka CM manage to release lesser water to Tamil Nadu?
Deve Gowda: Everyone is talking now of how S Bangarappa, in 1991, passed an ordinance that Cauvery belonged to Karnataka. That was struck down and we got a lot of hostility and abuse from the Supreme Court as well as in the national arena because of it.That is not the way. In 1995, we were asked to release 30 TMCFT, but there was no water. PM Narasimha Rao convened a meeting of CMs and opposition leaders. All of us went, all of them also had come. She (J Jayalalithaa, Tamil Nadu CM) had brought a bundle of dried paddy from some corner of some field. I gave a CD to the PM. We had gathered visual evidence of how much water was there in the TN dams and what condition their crops were in. She got up and walked out. Rao asked us to release a total of 11 TMCFT then.Why has this not been done in the other distress years that Karnataka faced?
Deve Gowda: Neither (S M) Krishna in 2002 nor (Jagadish) Shettar in 2012 tried the method I did. Our experience in Karnataka has been bitter, as there is no political unity on this issue, unlike in Tamil Nadu. Whether it is DMK or AIADMK, they unite on the cause of Cauvery. Here, I have seen what has happened each time and didn’t want Siddaramaiah to go through the same, So I said please release the water as demanded. What do we gain by the bandhs or burning vehicles? Only losses. We need political unity and pressure.

Your son and JD(S) state president H D Kumaraswamy has said your party will not allow a drop of water to be released to Tamil Nadu.
Deve Gowda: I am speaking as a former PM, not as the head of a political party. He is looking at political realities at the ground level.

Union minister Ananthkumar has said the state needs to do more homework and present its case better to the Supreme court and the Cauvery supervisory committee.
Deve Gowda: The same (Fali S) Nariman was our advocate in 1995. He told me we should release 5 TMCFT of water before a Supreme court hearing for 30 TMCFT. I didn’t call an all party meeting, I took a tough decision as CM and ordered release of water then also. It worked in our favour, though the opposition led by BJP’s B S Yeddyurappa staged a dharna in the assembly. The tribunal award was given by a divided bench and it is full of injustice against Karnataka. Until that is resolved, the Supreme Court will just follow its language.
Source : I solved Narmada, Tehri, Ganga. Why can’t Narendra Modi solve Cauvery, asks HD Deve Gowda
Courtesy : Economic Times – Opinions