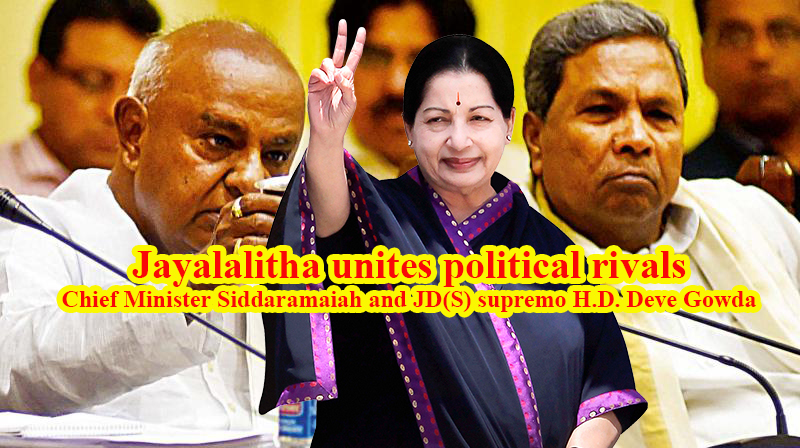 The Cauvery water dispute may have created a divide between Tamil Nadu and Karnataka, but it has succeeded in getting political rivals, Chief Minister Siddaramaiah and JD(S) supremo, H.D. Deve Gowda, who have not seen eye to eye for over a decade, to put their heads together to devise a strategy to protect the state’s interests.

The latter has now advised him to defy the Supreme Court order on releasing more water to the neighbouring state and even promised to stand by him if he was hauled up for contempt.

Going by party sources, both men have been in touch ever since the Supreme Court gave its verdict a few weeks ago on the release of water to Tamil Nadu. And Mr Siddaramaiah, who had refused to meet the JD(S) leader after becoming Chief Minister, called on him at his home in Padmanabhnagar to persuade him to attend the all- party meeting on the Cauvery issue.

While the JDS veteran had until recently advised following the Supreme Court diktat, hoping it could postpone the forming of the Cauvery Water Management Board, he changed his stance once it directed the Centre to form it anyway, putting  the interests of the people of the Cauvery basin at risk.

He is now all for  going on the offensive, particularly as the BJP is unwilling to antogonise Tamil Nadu CM, J. Jayalalithaa and is hoping to return to power in Karnataka by discrediting the Siddaramaiah government.

He has explained the repercussions of defying the Supreme Court order and reportedly suggested that Mr Siddaramaiah consult the party high command in the matter.

Former Chief Minister, S M Krishna too has advised  him to stop relesase of water to Tamil Nadu, according to party sources. It is believed his backing could  help persuade the high command to give the CM the go- ahead he needs to  defy the Supreme Court.