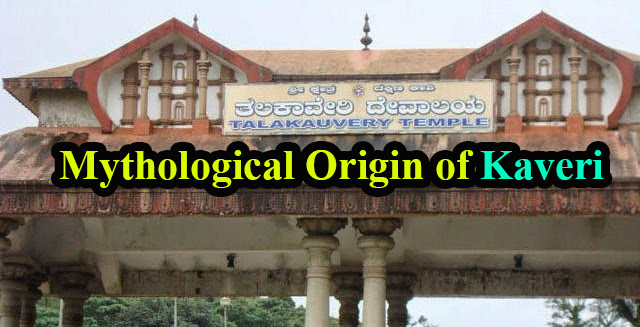 The Kaveri Purana or Kaveri Mahatmya describes the sacred river from its source to its union with the sea, and enumerates the holy bathing places and the temples on its banks.The Kaveri Purana seeks to glorify the holy river, whose divine origin, its intimate relationship with the rishi Agastya (the settler of the Vindhya mountain range, the great son of both Mitra and Varuna), and its course through the eastern country into the sea being directed in obedience to the counsel of Agastya, all conspire to give it a character of surpassing sanctity. 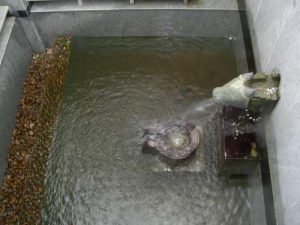 The account of Kaveri’s mythological origin begins with the seizure by the Asuras, of the amrita or nectar of immortality produced at the churning of the ocean, which spread consternation and despair among the hosts of the gods. They invoked Vishnu, from whom emanated the enchanting Mohini, while Lakshmi at the same time sent forth Lopamudre (a form of Parvati). Mohini, charming the Asuras by her transcendent beauty, rescued the drink of immortality and restored it to the gods. After this she retired to Brahmagiri, the hill at the source of the river Kaveri, and was changed into a rocky cave. Lopamudre was given to Brahma, who brought her up as his daughter. 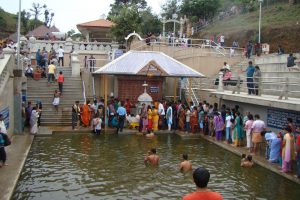 Kavera muni, a devout follower of Brahma, retires to Brahmagiri, there to give himself wholly to meditation on Brahma. He asks Brahma for children. Brahma gives him Lopamudre for a daughter, this is when she obtained the name Kaveri. In order to procure beatitude for her new father, she resolves on becoming a river, pouring out blessings on the earth, and all the merits arising from this course of devoted goodness are to be appropriated to Kavera muni. For this purpose she resorts to one of the heights ot Brahmagiri, and invokes Brahma to give her the privilege, when turned into a river, of absolving all people bathing in the holy waters from every sin they may have committed. Brahma, of course grants this blessing to his daughter.

While Kaveri is still absorbed in her devotions, the great rishi Agastya espies her, and asks her to become his wife. Though longing after the fulfilment of her vow, she consents to live with Agastya, under the condition, however, that she shall be at liberty to forsake him whenever she is left alone. One day Agastya went to bathe in the river Kanake, leaving Kaveri near his own holy tank, guarded by his disciples. Thus deserted by Agastya against his promise, she plunged into the holy tank, and flowed forth from it a beautiful river. The disciples tried to stay her course. She went under ground. At Bhaganda kshetra she appeared again, and flowed on towards Valamburi. When Agastya, on his return, saw what had happened, he ran after Kaveri, begged her pardon, and entreated her to return and to remain with him. Unwilling to change her mind, yet loathing to grieve Agastya, Kaveri divided herself, one half flowing off as a river, the other half staying with the rishi. Agastya then explained to the river half which road to take to the eastern sea, enumerating all the holy places lying in the way of the new stream.