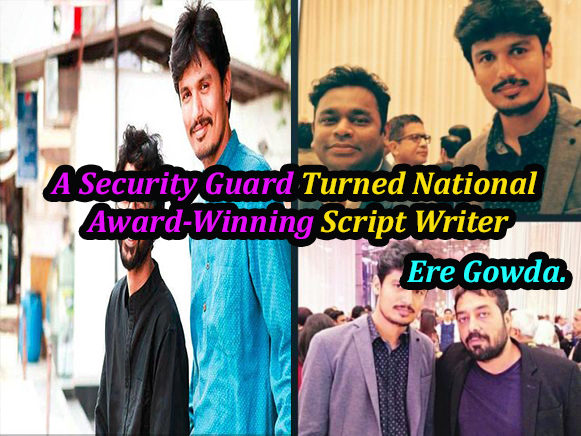 Ere Gowda’s life story could easily fit for a story of a feature film. His film Thithi has bagged a number of awards, nationally and internationally.

His family was struggling under severe financial problems. So, for helping them out, he started to work as a security guard at an automobile company in Mysuru after he completed Class X. he earned Rs 850 a month. But two years later, his mother fell ill – and he needed a higher salary to treat her.

Then he moved to Bengaluru to work as a guard at producer Pratap Reddy’s office. At that time, Pratap’s son was in school. As the office was close to Raam’s home, Ere used to play cricket, table tennis and other sports with him, when he returned from school. Raam did not know Kannada and Ere didn’t know English, but language was not barrier for their friendship.

When Ere’s mother passed away three years later, he was not interested in working as a security guard anymore. So he decided to return to his village and find work there.

But Raam insisted him not to go back and got him a work at Raam’s mother’s NGO. There, Ere worked as an office boy and started to like computers and data entry jobs.
It was at that time, Raam developed his interest in films, while he was studying at St Stephens Delhi. Raam came back after his studies and both of them shot a short film called Eka with their DSLR, which was test movie, but it went on to be screened at 21 international film festivals and they won many awards.

This honour was a big motivation for the duo and so they decided to take up a feature film. Ere had told Raam several stories about his village. A curious Raam visited the place and decided to study filmmaking for a year to make Thithi.

Raam Reddy directed the film, while Ere Gowda worked on its screenplay and helped out in every other aspect of the film. The movie released at film festivals, and within six months the movie won seven awards, two of them at Locarno, one of the oldest film festivals in the world. Thithi also won the National Award for Best Kannada Film.

The film stars people who have no experience in acting or the film industry. The film brings to light the different ways society behaves in the face of death.