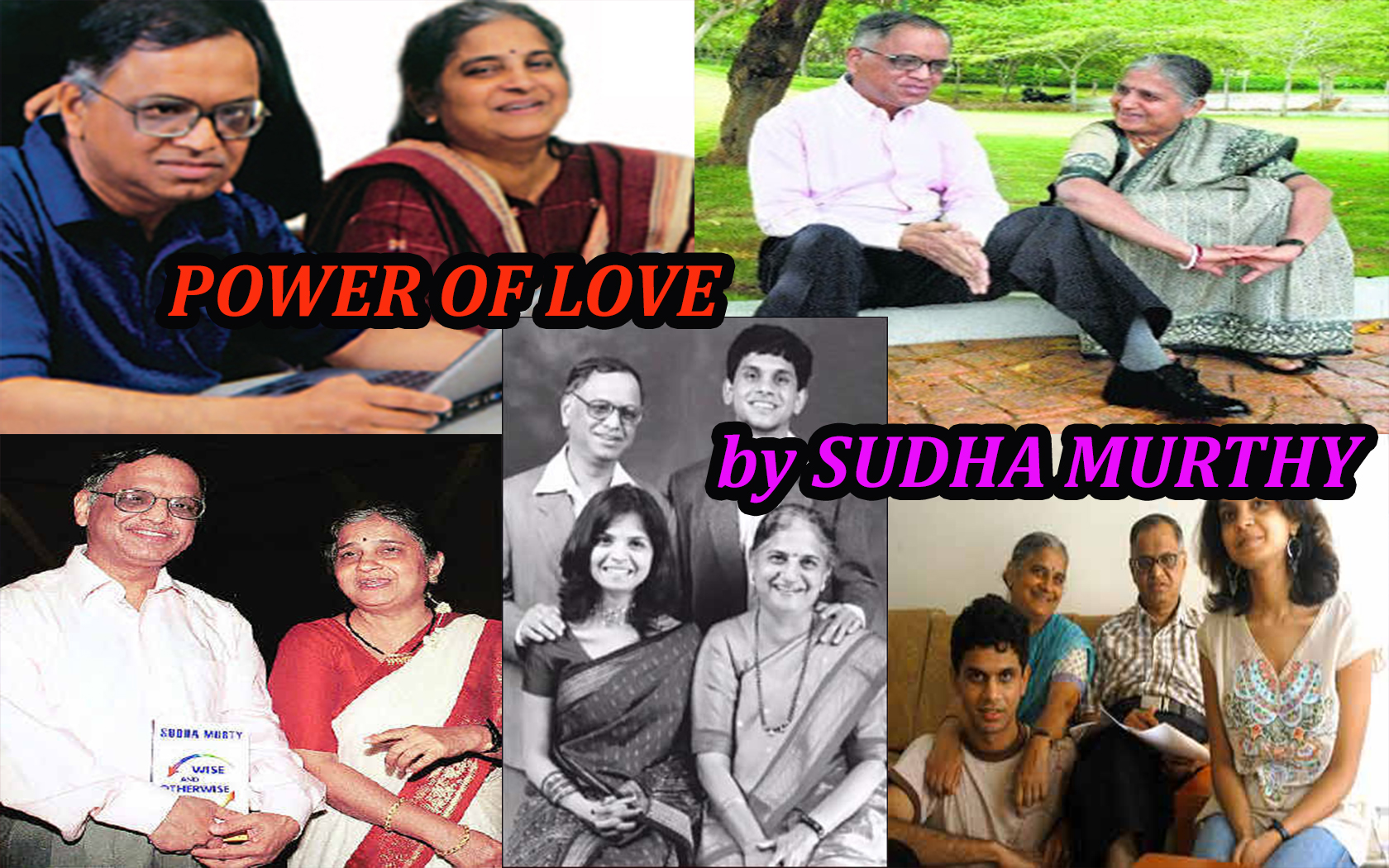 POWER OF LOVE
by SUDHA MURTHY

It was in Pune that I met Narayan Murty through my friend Prasanna who is now the Wipro chief, who was also training in Telco(TataMotors) . Most of the books that Prasanna lent me had Murty’s name on them which meant that I had a preconceived image of the man. Contrary to expectation, Murty was shy,bespectacled and an introvert. When he invited us for dinner. I was a bit taken aback as I thought the young man was making a very fast move. I refused since I was the only girl in the group. But Murty was relentless and we all decided to meet for dinner the next day at 7.30 p.m .. at Green Fields hotel on the Main Road ,Pune.

The next day I went there at 7′ o ! clock since I had to go to the tailor near the hotel. And what do I see? Mr. Murty waiting in front of the hotel and it was only seven. Till today, Murty maintains that I had mentioned (consciously! ) that I would be going to the tailor at 7 so that I could meet him… And I maintain that I did not say any such thing consciously or unconsciously because I did not think of Murty as anything other than a friend at that stage. We have agreed to disagree on this matter.

Soon, we became friends. Our conversations were filled with Murty’s experiences abroad and the books that he has read. My friends insisted that Murty as trying to impress me because he was interested in me. I kept denying it till one fine day, after dinner Murty said, I want to tell you something. I knew this as it. It was coming. He said, I am 5’4″ tall. I come from a lower middle-class family. I can never become rich in my life an! d I can never give you any riches. You are beautiful, bright, and intelligent and you can get anyone you want. But will you marry me? I asked Murty to give me some time for an answer. My father didn’t want me to marry a wannabe politician, (a communist at that) who didn’t have a steady job and wanted to build an orphanage…

When I went to Hubli I told my parents about Murty and his proposal. My mother was positive since Murty was also from Karnataka, seemed intelligent and comes from a good family. But my father asked: What’s his job, his salary, his qualifications etc? Murty was working as a research assistant and was earning less than me. He was willing to go dutch with me on our outings. My parents agreed to meet Murty in Pune on a particular day at10 a. m sharp. Murty did not turn up. How can I trust a man to take care of my daughter if he cannot keep an appointment, asked my father.

At 12noon Murty turned up in a bright red shirt! He had gone on work to Bombay , was stuck in a traffic jam on the ghats, so he hired a taxi(though it was very expensive for him) to meet his would-be father-in-law. Father was unimpressed. My father asked him what he wanted to become in life.

Ironically, today, I have opened many orphanages something, which Murty wanted to do 25 years ago. By this time I realized I had developed a liking towards Murty which could only be termed as love. I wanted to marry Murty because he is an honest man. He proposed to me highlighting the negatives in his life. I promised my father that I will not marry Murty without his blessings though at the same time, I cannot marry anybody else. My father said he would agree if Murty promised to take up a steady job. But Murty refused saying he will not do things in life because somebody wanted him to. So, I was caught between the two most important people in my life.

The stalemate continued for three years during which our courtship took us to every restaurant and cinema hall in Pune. In those days, Murty was always broke. Moreover, he didn’t earn much to manage. Ironically today, he manages Infosys Technologies Ltd., one of the world’s most reputed companies. He always owed me money. We used to go for dinner and he would say, I don’t have money with me, you pay my share, I will return it to you later. For three years I maintained a book on Murty’s debt to me.. No, he never returned the money and I finally tore it up after my wedding.

The amount was a little over Rs 4000. During this interim period Murty quit his job as research assistant and started his own software business. Now, I had to pay his salary too! Towards the late 70s computers were entering India in a big way.

During the fag end of 1977 Murty decided to take up a job as General Manager at Patni computers in Bombay .. But before he joined the company he wanted to marry me since he was to go on training to the US after joining. My father gave in as he was happy Murty had a decent job, now.

WE WERE MARRIED IN MURTY’S HOUSE IN BANGALORE ON FEBRUARY 10, 1978 WITH ONLY OUR TWO FAMILIES PRESENT.I GOT MY FIRST SILK SARI. THE WEDDING EXPENSES CAME TO ONLY RS 800 (US $17) WITH MURTY AND I POOLING IN RS 400 EACH..

I went to the US with Murty after marriage. Murty encouraged me to see America on my own because I loved travelling. I toured America for three months on backpack and had interesting experiences which will remain fresh in my mind forever. Like the time when the New York police took me into custody because they thought I was an Italian trafficking drugs in Harlem . Or the time when I spent the night at the bottom of the Grand Canyon with an old couple. Murty panicked because he couldn’t get a response from my hotel room even at midnight. He thought I was either killed or kidnapped.

IN 1981 MURTY WANTED TO START INFOSYS. HE HAD A VISION AND ZERO CAPITAL…initially I was very apprehensive about Murty getting into business. We did not have any business background … Moreover we were living a comfortable life in Bombay with a regular pay check and I didn’t want to rock the boat. But Murty was passionate about creating good quality software. I decided to support him. Typical of Murty, he just had a dream and no money. So I gave him Rs 10,000 which I had saved for a rainy day, without his knowledge and told him, This is all I have. Take it. I give you three years sabbatical leave. I will take care of the

financial needs of our house. You go and chase your dreams without any worry. But you

have only three years!

Murty and his six colleagues started Infosys in 1981,with enormous interest and hard work. In 1982 I left Telco and moved to Pune with Murty. We bought a small house on loan which also became the Infosys office. I was a clerk-cum-cook- cum-programmer. I also took up a job as Senior Systems Analyst with Walchand group of Industries to support the house.

In 1983 Infosys got their first client, MICO, in Bangalore . Murty moved to Bangalore and stayed with his mother while I went to Hubli to deliver my second child, Rohan. Ten days after my son was born, Murty left for the US on project work. I saw him only after a year, as I was unable to join Murty in the US because my son had infantile eczema, an allergy to vaccinations. So for more than a year I did not step outside our home for fear of my son contracting an infection. It was only after Rohan got all his vaccinations that I came to Bangalore where we rented a small house in Jayanagar and rented another house as Infosys headquarters. My father

presented Murty a scooter to commute. I once again became a cook, programmer, clerk,

secretary, office assistant et al. Nandan Nilekani (MD of Infosys) and his wife Rohini stayed with us. While Rohini babysat my son, I wrote programs for Infosys. There was no car, no phone, and just two kids and a bunch of us working hard, juggling our lives and having fun while Infosys was taking shape. It was not only me but also the wives of other partners too who gave their unstinted support. We all knew that our men were trying to build something good.

It was like a big joint family,taking care and looking out for one another. I still remember Sudha Gopalakrishna looking after my daughter Akshata with all care and love while Kumari Shibulal cooked for all of us. Murty made it very clear that it would either be me or him working at Infosys. Never the two of us together… I was involved with Infosys initially.

Nandan Nilekani suggested I should be on the Board but Murty said he did not want a husband and wife team at Infosys. I was shocked since I had the relevant experience and technical qualifications. He said, Sudha if you want to work with Infosys, I will withdraw, happily. I was pained to know that I will not be involved in the company my husband was building and that I would have to give up a job that I am qualified to do and love doing.

It took me a couple of days to grasp the reason behind Murty’s request..I realized that to make Infosys a success one had to give one’s 100 percent. One had to be focussed on it alone with no other distractions. If the two of us had to give 100 percent to Infosys then what would happen to our home and our children? One of us had to take care of our home while the other took care of Infosys.

I opted to be a homemaker, after all Infosys was Murty’s dream. It was a big sacrifice but it was one that had to be made. Even today, Murty says, Sudha, I stepped on your career to make mine. You are responsible for my success.

That’s the Power of Love.

Cancel reply
My Story: A Model Corporator…!!
To Top