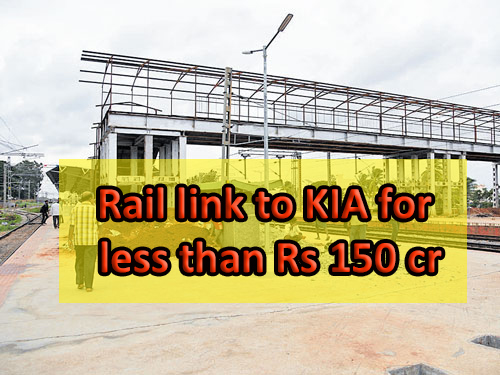 A dedicated railway link to the Kempegowda International Airport (KIA) can be a reality in three months, spending less than Rs. 100 crore.

If this sounds fantastic, consider this: The Yelahanka-Channasandra track has been doubled and electrified. Extend that to Baiyappahanalli, add a halt station under Trumpet Flyover near KIA and kickstart a dedicated train!

Is this more workable or a Namma Metro connection from Nagawara that could take at least 10 years and hundreds of crores to complete? A reality check by Deccan Herald offered the clinching evidence that a railway link could be easily activated, and at a fraction of the money that the government wants to invest on a KIA metro link.

Here’s the reality: The track-doubling work till Channasandra station was completed in January. Train service on the new track commenced in March. Doubling the 4-km existing Channasandra – Baiyappanahalli and Channasandra – K R Puram line could now connect an airport train to Whitefield, the IT hub.

Since the Yelahanka-Devanahalli line is grossly underutilised, an airport train can be operated even with the existing single track, say urban rail experts. KIA-bound air passengers could alight at a halt station below the Trumpet Flyover and take a shuttle bus to the airport.

The station, along with loop-lines, could be built at a cost of about Rs. 15 crore. Add another Rs. 20 crore to electrify the Yelahanka-Devanahalli line and Rs. 50-75 crore for coaches, and the airport link will be all set. Even without a double track to Baiyappanahalli or K R Puram, the Channasandra station is by itself a convenient boarding point. Located right on the Outer Ring Road, the station is close to Ramamurthynagar, HRBR Layout, CV Raman Nagar and surrounding areas. But a short extension to Baiyappanahalli will connect this line to the Namma Metro terminal, benefiting commuters from Indiranagar, Halasuru and beyond.

The Yelahanka station, currently being upgraded with an additional platform, is already well-connected to the city’s railway grid. Airport-bound passengers could board a train at the City Railway Station, Malleswaram or the Yeswantpur terminal to reach Yelahanka and head to the Trumpet Flyover halt station. Rail experts suggest that trains could be operated every 20 minutes from these stations and once in 30 minutes from the Whitefield-KR Puram-Channasandra side.