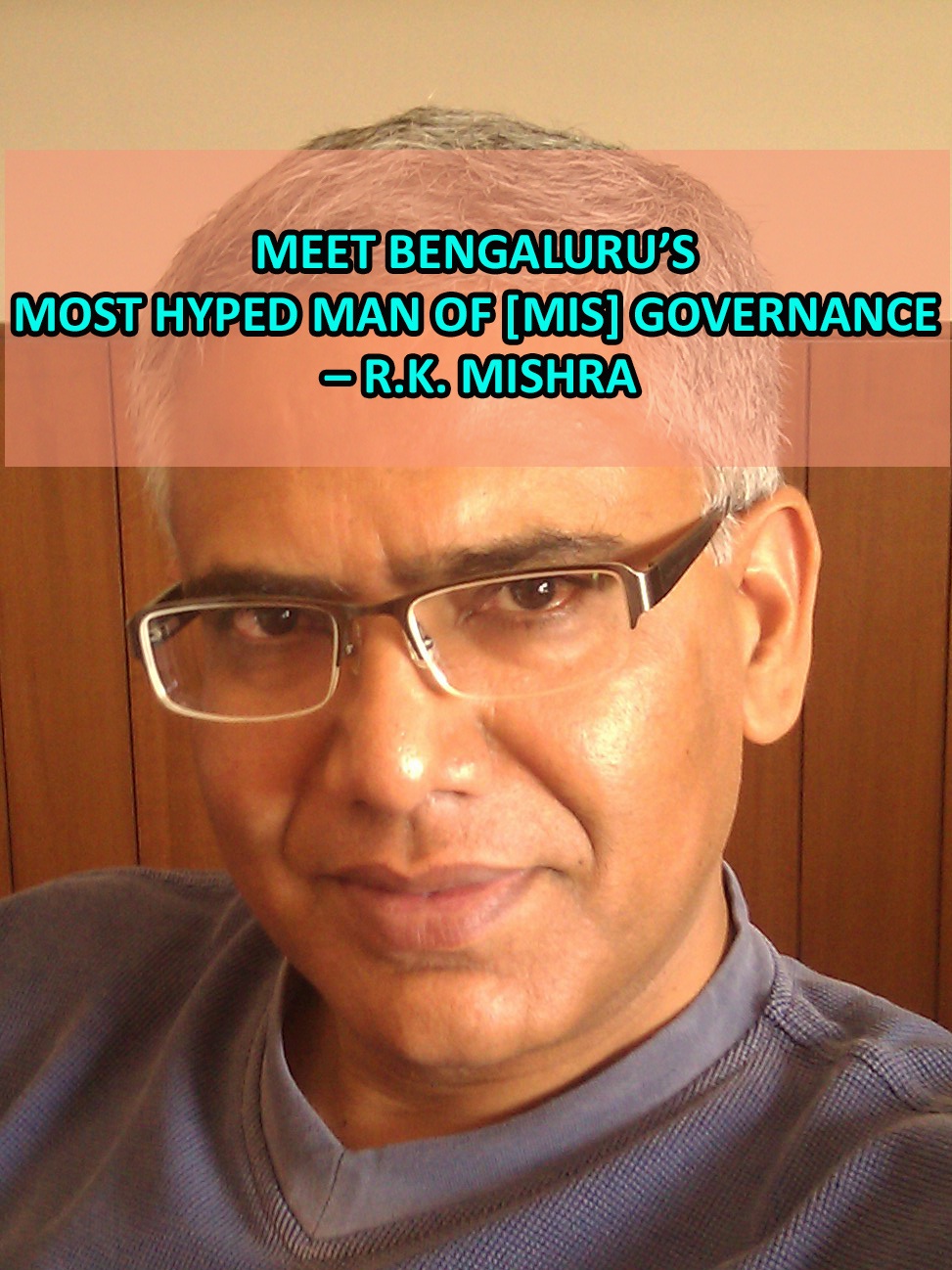 Failed political aspirations, penchant for publicity, overrated Intellectual and a person who is credited by his detractors as ‘Jack of all; Master of None. Meet, R.K.Mishra, who calls himself a Bengalurean by heart, but none of his Party’s hoardings have even a line of Kannada in it. 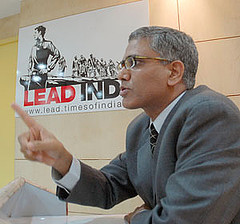 He says that his party, The Navbharat Democratic Party will ‘alter’ Electoral dynamics in India. Mr.Mishra – an IIT grad is a member of the ‘Vision Group’ – a government constituted body aiming to solve civic bottlenecks and resolve the infrastructural woes of namma Bengaluru. Mr.Mishra was also a member the ‘Vision Group’s, estranged and now defunct cousin BPAC – which is no longer effective now.

TENDERSURE – BURDEN ON THE EXCHEQUER 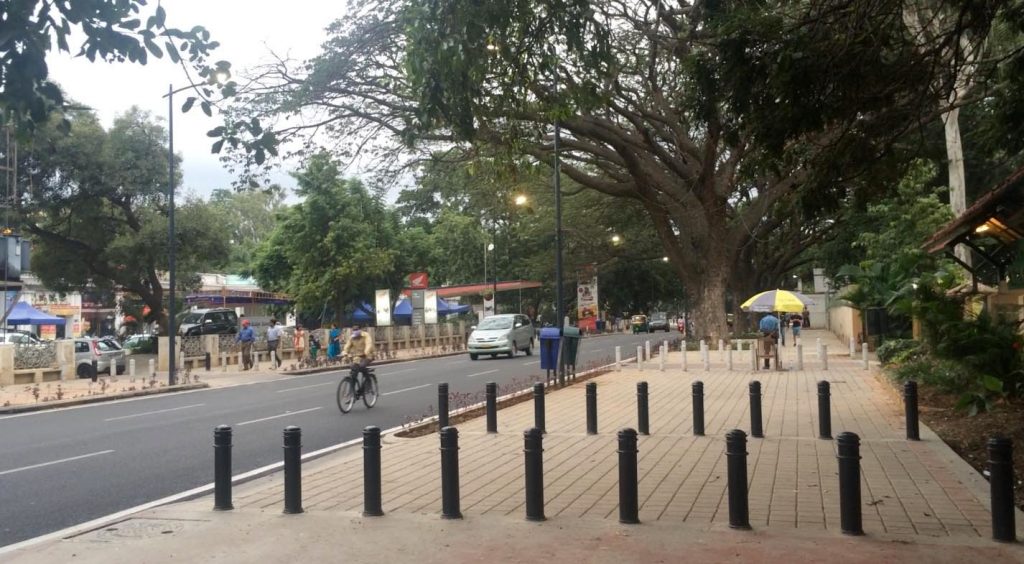 TENDESURE – a project to provide ‘pedestrian friendly’ roads and ease traffic has now become a subject of debate for its extravagant cost. Such huge footpaths have reduced the road’s width considerably in traffic intensive roads such as Cunningham Road and St.Marks Road.

The Tendersure roads are now [in]famous for their flooding during rains – [The cost of these roads are supposed to be 250% more than the normal road/pavement construction.

Such pavements gets ‘water logged’ for the simple reason that the ‘Shoulder Drain’ which was supposed to be at a 45 degree angle is at a 90 degree angle – a civil engineering miracle, needing an explanation from this IIT Grad, who incidentally was also a technical member of BBMP.

A senior Corporator made a humorous remark: “ The makers of these road are under the assumption that the water ‘attains energy’ to enter into drain, rather seep in to the drain”

An ex-corporator who requested anonymity said “Such footpaths are not needed under the Tendersure project; it’s a sheer waste of taxpayer’s money he said, the corporator who is also a qualified Civil Engineer said that Government could have made a ‘footpaths’ at 1/3 of the cost of Tendersure project” . “I don’t know why such huge money is being spent” – he says.

A PERSONALITY ‘SENSATIONALIZED’ BY MEDIA WITH ‘ZERO’ ACHIEVEMENTS

RK Mishra – an overrated intellectual shot into fame by a prominent National Newspaper for winning the contest called ‘Lead India’ – a Television initiative launched by Times of India in search of a charismatic leader in India. While he has worked on certain projects for social development and free medication; his contribution for urban development has been a ‘disastrous failure’, to say the least.

RK Mishra showed his frustration on Twitter by calling the localites as ‘Racists’ on a scuffle that broke between an Auto Driver and an Army Major – which apparently went viral in the social media. Without even ascertaining, the facts of the scuffle, reason behind the petty fight, he resorted to the Social Media through insinuations on the local community – unbecoming of his Intellectualism. Yes, ‘Empty Vessels do make a ‘heavy’ noise.

Blame it on his unemployment, float his political aspirations and get a VIP pass for a Ministerial level meeting – he does resort to such ‘antics’ for which he has been trolled heavily in the Social Media. R.K, who has worked for NGO’s and seemed to have made some changes in rural sector – neither provides tangeable and cost effective solutions for Bengaluru’s wailing Infrastructure nor does he stop uttering ‘non sense’ through his twitter account.

NOT THE FIRST TIME HE HAS BLAMED THE LOCALITES

Showing his frustration in Social Media is not new to R.K.Mishra.
“Shrikant Gowda, who follows R.K.Mishra on twitter says “Every time there is a road-rage, scuffle in bengaluru between an outsider and a Kannadiga; Mishra, irrespective of where he is makes a provocative comment, often depicting the localites in poor light” he says.

Media adulation, close proximity to corporate big wigs has earned him the coveted status of a ‘Member’ in the Vision Group headed by the Chief Minister.

Bengalureans know that his contribution has been restricted to providing ‘economically unfeasible suggestions’, cleaning a school and depicting Bengaluru’s Infrastructural woes in poor light through Social Media.

Mishra, must understand being a Bengalurean he should not stoop to such levels of criticizing the localites or generalizing them as ‘Racists’ for incidents which have no genuinity. An unconditional apology for uttering such non sense is expected of him.

Sandeep, President of Samanya Kannadiga, a civil society group and an NGO says “Such statements are not expected from Mr.R.K.Mishra, it only shows his frustration towards the local community, he has to issue an unconditional apology for generalizing Kannadigas as racists”.

“We will take steps within the legal framework if he doesn’t.” – he says.

Mishra, must take a ‘cue’ from Smt Sudha Murthy who through her work is doing several programmes for upliftment of women, renovating schools, development programmes in the health sector, Improving the education system and not resorting to such methods of cheap publicity.

Such dignity cannot be expected from Mishra.